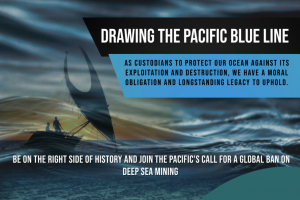 „Deep Sea Mining is Not Needed, Not Wanted, Not Consented!“

The Pacific Draws the BLUE LINE against Deep Sea Mining

„Deep Sea Mining is Not Needed, Not Wanted, Not Consented!

The Pacific Draws the BLUE LINE against Deep Sea Mining

The Ocean is the living blue heart of our planet. It is our common heritage, but also our common responsibility. We are its guardians. We recognize its significance and its essence as the basis of our Pacific identity and wellbeing. We Are the Ocean. In its preservation, we are preserved.

For millennia, our ancestors have held this mantle of stewardship, embedding the wisdom of their resource management and conservation practices into their culture and traditions. Their vision was always beyond their temporal needs; the survival and wellbeing of future generations was central to their view of the world.

As custodians of the responsibility to protect the Ocean against its exploitation and destruction in our time, we have a moral obligation and longstanding legacy to uphold. Our forebears have, on this frontier, stood firm against the ruinous incursions of nuclear testing, driftnet fishing and bottom trawling, and marine pollution. Against impossible odds, they united to move a world to adopt a nuclear test ban treaty, a ban on driftnet fishing and the London Dumping Convention. Awareness of the connection between climate change and the health of our Oceans gathers momentum globally.

Deepsea mining is the latest in a long list of destructive industries to be thrust into our sacred ocean. It is a new, perilous frontier extractive industry being falsely promoted as a proven answer to our economic needs. While its promised benefits remain speculative, its pursuit is insidious. Even at an experimental stage, deep sea mining (DSM) is already proving harmful to Pacific communities, their livelihoods, cultural practices, and their wellbeing.

We call for a total ban on DSM within our territorial waters and in areas beyond national jurisdiction.

Mindful of the nuclear legacy in the Pacific, and determined to not see it repeated, our Ocean must never again be used as the ‘testing grounds’ for dangerous pursuits that serve the interests of powerful states, institutions and industry. Rich states, promoting their multinational companies, facilitated by powerful institutions have been working with our own Pacific Island governments enticing them with the promise of wealth, despite technologies for extracting minerals on the ocean floor remaining untested in terms of environmental safety.

Land-based mining also came with the promise of economic, social and environmental benefits for our people. Pacific peoples have carried the environmental and social costs of phosphate, copper, gold and bauxite mining in the region and continue to feel the impacts of its devastation. Our lived experience in the Pacific shows clearly, however, that powerful corporations benefit the most while our people bear the costs of the destruction of our natural environment. Across the resource frontiers of our region, history records this deception time and again.

The corporations, institutions and their government backers advocating DSM promise great wealth from the unexplored depths of our oceans. Their claim that DSM’s environmental impacts will be minimal is audacious given the fact that very little is known, let alone understood, about the ecologies of our oceans.

We will not be fooled by predatory actors who frame the discussion and set the rules to advance their interests. We call on our Pacific Governments and the international community to stand, once again, on the right side of history.

What is actually known about our ocean depths runs contrary to the push for DSM. Scientists increasingly warn of:

Pacific governments keen to pursue DSM have to ask themselves, to what extent are they willing to destroy the ocean’s life support system during a time of climate, and planetary emergency and in what is commonly known as the age of extinction. Our governments must ask themselves who stands to gain the most from the destruction of our ocean.

Furthermore, scientists acknowledge the critical carbon sequestration functions of deep-sea hydrothermal vents and methane seeps, and are cautioning that the release of sequestered methane (a greenhouse gas thought to be 25 – 50 times more potent that carbon dioxide) could be a ‘doomsday climatic event’.

The health of oceans is already under unprecedented threats including from a multitude of human induced stressors such as overfishing, pollution, plastics, nuclear waste and radioactive material, and climate emergency along with related impacts such as ocean acidification and warming of oceans.

To mask their profit seeking motivation, proponents are attempting to ‘greenwash’ DSM, arguing that seabed minerals are necessary for so-called green technology and to enable the global transition from fossil fuels to renewable energy. This is a spurious argument as the minerals needed can come from better recycling efforts, ethical consumption and production, and prioritizing the reuse of minerals in circulation.

It would be beyond ironic if leaders of Pacific Island countries, which are already at the forefront of the impacts of climate change and facing existential threats to territorial integrity, allow themselves to be persuaded to mine the ocean floor, thereby pushing the world into the doomsday scenario.

Although our own governments and industry actors have argued that the mining of resources on the deep seabed are entirely the provenance of the state, governments are still required to obtain the free, prior and informed consent of the people, particularly indigenous peoples, over any development activities which would adversely impact their lands, territories and resources. The fact is our governments

do not have the free, prior and informed consent of our people to proceed with DSM in the Pacific Ocean nor in areas beyond national jurisdictions.

There is no scenario in which DSM is permissible. If it’s not safe in our EEZs, it’s not safe in the Pacific as a whole, and therefore not safe for the world. A total ban on DSM is the only way to ensure the integrity of the ocean, the heart of our planet.